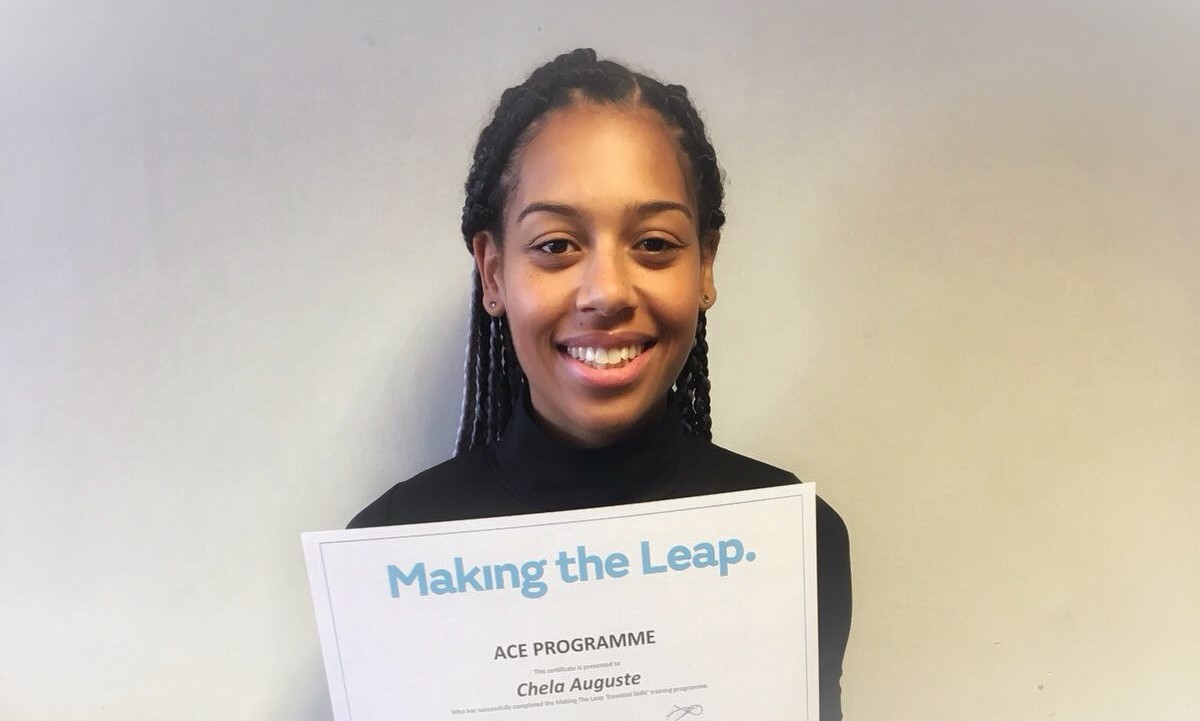 I had a typical upbringing in south-east London – I went to a comprehensive school and then studied Psychology and Drama at Northampton University, graduating in 2017. When I finished university I was struggling to decide what I wanted to do. I worked for an accountancy firm for a little while, but I found it quite difficult, which really lowered my confidence and put me off looking for similar roles. I felt like my lack of confidence was affecting my career progress, especially in interviews, as I was very nervous and that came across. After a few months of frustration I decided to review my options. I still wanted to work in accounting and finance, but I wasn’t sure what I needed to do to get where I wanted. I feared every aspect of working and I just didn’t feel good enough.

Things started to change when I spoke about my struggles looking for corporate roles to a friend that had completed the Making The Leap Workshop. She told me that the Workshop had really helped her and reassured me that everyone there was really supportive, even after finishing the course. One of the key things I needed to improve was my CV, which she said they could also help me with. When I called I got a really friendly welcome – I was asked to come in, meet the Engagement Team and arrange to begin the Workshop. At first I wasn’t sure what to expect – I didn’t know what activities we could do in three weeks that were going to help me make the progress I needed. But I decided it was still an active step forward and I should give it a go.

One of the first things that the Workshop taught me was to take ownership of my situation. It made me realise that I actually had control over some of the things I didn’t think I could control. So whether it was about taking potential traffic into account and leaving earlier for interviews or being more strategic about job applications, it helped me feel less stuck. Once I had overcome this mental barrier things started to fall in to place. Some of the key characteristics I gained were preparation and resilience, but I also learned a lot about commercial awareness and having a broad perspective on society, which makes a big difference when you’re working. I even watch the news now, which I never did before!

It wasn’t just that my soft skills improved though, my whole mindset became more positive and I had confidence in my ability to change, even when things were difficult. Further, I felt much more positive about trying new things and I even learned some tactics to help me maintain those new habits and ways of thinking. I was quite negative before but now I’m far more optimistic and I really believe that anything is possible if you commit to it. Trying so many new things on the Workshop helped me to overcome that fear and now I really embrace trying my hand at new things. I’m not afraid of failure anymore.

After completing the Workshop I was a lot more confident, especially with the knowledge that I would continue to receive support and guidance. I even attended a few networking events to maintain my progress, which I’d have been far too nervous to do previously. As I continued my job search I had some brilliant one-to-one feedback which helped me prepare for interviews, so when I heard about the Fund Officer role at Alter Domus, I felt confident and ready. Thankfully I got the job and started in February! I’m enjoying it there and looking forward to progressing – I want to be a fully qualified chartered accountant, which they are training me for, and get to a manager position in the next few years.

My best advice is to come with an open mind and be willing to try everything. The Workshop taught me that there is nothing wrong with me, there are just areas I need to practice – and it’s the same for everyone. This is the best place to practice and make mistakes. So even if you are scared, just try it. Just because you don’t know something it doesn’t mean you can’t learn it. Come, enjoy it and push yourself to finish. You won’t regret it.

Follow Making the Leap on social media for all the latest news and updates.